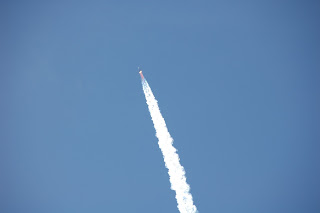 This is a digression from studio news; however, Thursday's launch was very exciting.  The Delta IV Heavy is the largest rocket ever to be launched from the west coast, carrying a top secret spy satellite payload.  Robert and I drove to Vandenberg AFB, or at least as close as we could get, to watch the launch.  The rocket rising silently above the hills was such a beautiful sight!  We didn't hear the roar until about 10 seconds after we saw the rocket.  There were hundreds of cars parked along the main and side roads; and when the rocket came over the foothills everyone watching started screaming and applauding the sight.  It was a really something to behold.
Posted by Belinda Hart at 10:58 AM